Today I drew a badass space marine! He's of the original StarCraft, very dumb redneck variety that gets by on his charming personality and rugged good looks until he is nuked from orbit by his own people for profit. Or until he's uselessly thrown against an alien nightmare bug onslaught. Or accidentally shot into space by a fellow spacefaring redneck drunkenly falling over a lever. Or...y'know I could be here all night with this. Let's just appreciate this guy's mug while it's still in (mostly) one piece! 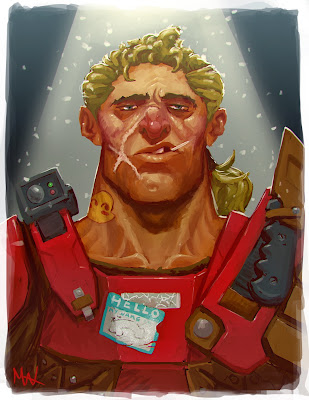 And he even gets a process gif!

OctoberSketch!
Posted by Max at 3:21 AM